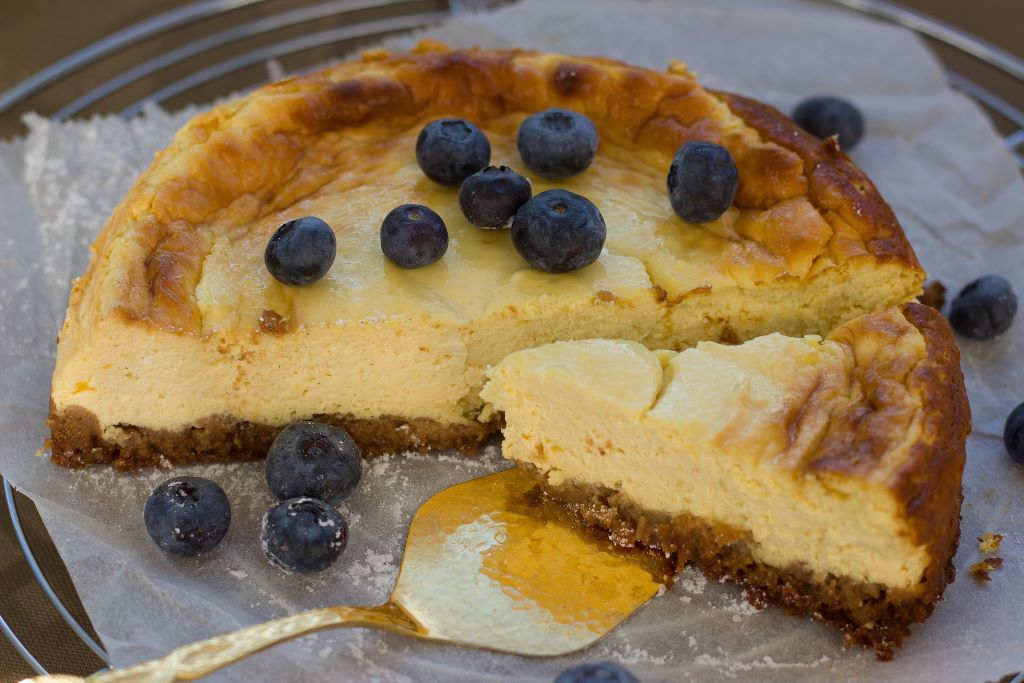 Despite of its name, cheesecake is hardly classified as a cake. Some people refer to it as a torte, due to the presence of significant amount of eggs, as the sole source of leavening. Torte is a rich, usually multi-layered cake, that is filled with whipped cream, buttercream, mousse, jam, or fruits. Tortes are mainly baked in springform pans. A sponge cake is often the base, but also commonly replaced by ground nuts mixed with a very little amount of flour, if at all, or simply breadcrumbs.

Some others classify it as a custard pie, as it has a separate crusty bottom, a soft filling, and lacks flour. Custard pie is any type of uncooked custard mixture added to an also uncooked (or partially cooked) crust, which are then baked together. When referred to a custard pie, it usually means milk, egg, sugar, salt, vanilla and nutmeg in combination with a pie crust. However, a real custard is defined simply as a liquid thickened with eggs. As a result, the pie becomes very rich.

There are also people who consider the cheesecake as a flan or a tart. The latter not to be mixed with torte, which has just been explained shortly above. A flan, when referred to as a dessert, is prepared with whole eggs, milk, sugar and vanilla. Usually without any particular base. One of the well-known ones is crème caramel. A tart, compared to a flan, is baked, has a filling over a pastry base, without a pastry top. The pastry is usually a shortcrust one, while the filling may be either sweet or savory.

The aforementioned categories not only seem to overlap to a great extent, but they really do. Not to forget that cheesecakes have different variations, as well, and thus one might fit into one category better than others. The most fundamental difference lies between the baked and the unbaked versions, which are further specified according to the regions of their origins. Not surprisingly, all continents (in Europe even countries) have their own variations, so even the summary of the main characteristics would require a whole separate post.

Instead of going very theoretical and spending more time on fine-tuning the classification, it is time to see where we can go. If you type ‘cheesecake’ into one of the search engines, you will be fled by hundreds, if not thousands, of recipes. All very different and – most probably – all delicious. Instead of getting overwhelmed right at the start, we may keep it simple.

See below a very easy version, that is according to the Chicago-style, meaning a baked one with a cream-cheese on a crusty base. Take your chance, try it and send us your comments.

Chicago-style cheesecake - as MYC likes it

This is a very easy recipe, though very tasty and spectacular. It can be made of lactose-free and gluten-free ingredients, which are relatively easy to access in most of the countries. Based on which season we are in, the fruit-sauce can be made of the seasonal ones, but – our opinion is that – the best are the red fruits with a bit of a sourish taste.

This recipe is for a 20-22cm springform pan, which is for 4 average portions. We prefer this particular type, because of its durability (meaning that it does not deform over the years), its cover and shape (leakage-protection). If you would like to go funky, then you will find also a red one here.

(If you would like to browse around and see other baking forms of the same quality, you can find them here.)

400 g Philadephia cream cheese (natural one, not the light version) – the container with the purple color holds the lactose-free

400 g black berry (as this is Autumn, but e.g. strawberry, raspberry, etc., and also a mixture of them is nice)

For the baking form preparation:

Melt the butter in a small pot above boiling water. In the meantime, ground the cookies in the grounder. Once ready, put the ground cookies and the sugar (if applicable) into the melted butter and stir it.

Take the baking form and prepare it with the butter and flour coating. Take it aside. Switch on the oven and heat it to 190 degrees (with air-flow).

Put the cream cheese into the food processor, and start with low speed. Put the sugar and the vanilla flavored sugar (or the vanilla aroma) into it. When relatively smooth, add the whole eggs one by one, until perfectly looks homogenous.  Finally add the lemon juice and slowly stir into the mass.

Take the baking form and put the base into the bottom. Level it accurately. Put the filling onto the top and level it, as well.

Put it into the oven and bake it for ca 40-45 minutes, until it gets golden brown. When ready, do not open the door of the oven immediately, just until half-way, after you switched off the oven. Once it cooled down a bit, then open the door completely, leave it like that to cool further, and finally take out the baking form with the cake. Leave it as it is until gets cold.

It is better if you wait until it is perfectly cold, and usually the best after cooling further in the fridge over the night, or at least 5-6 hours.

In the meantime, take a small pan and start boiling the water, the sugar and the berries, without putting any cover on it. Boil it on low temperature for 20 minutes. Cool it a bit than put into the food processor and quash. Cool down properly.

Serve it on room temperature with the cold fruit sauce or without it.

Give them a pumpkin to talk about