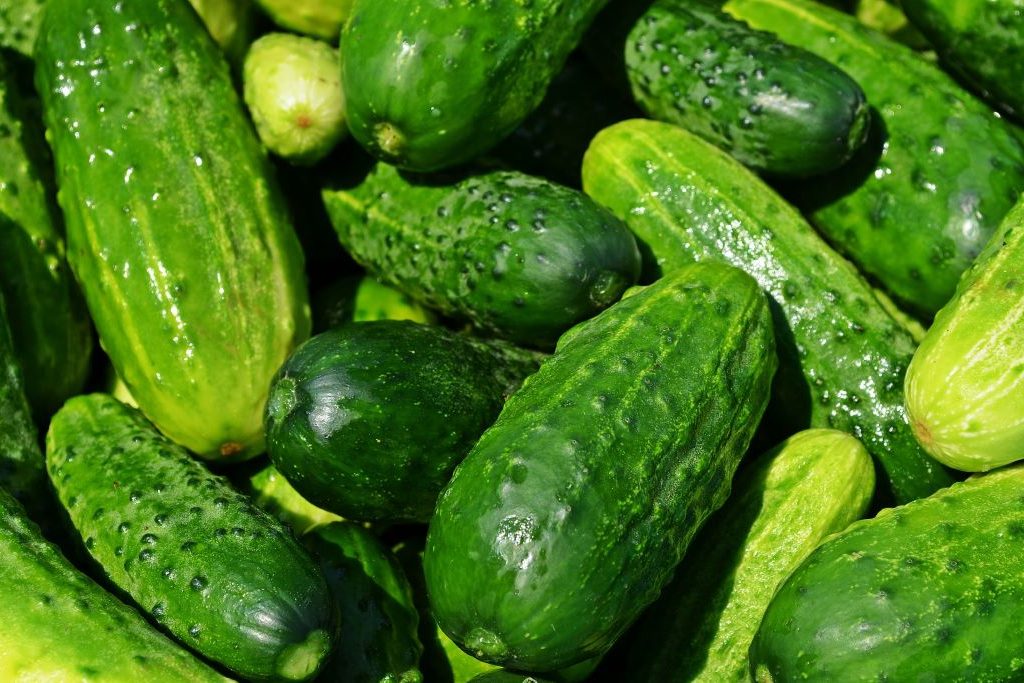 When the color of the month has been decided, the first idea was to have at least one post about cucumbers. However, it was far not that obvious that it will appear in the gastronomy section, as it would fit at least as well in the health and beauty part. Assuming that you will read this when the heatwave is still on in almost the whole Europe, we start with some easy breeze ideas, all made of cucumber.

Cucumber (Cucumis sativus) is a widely cultivated plant in the gourd family, Cucurbitaceae. It is a creeping vine that bears cucumiform fruits. It roots in the ground and grows up trellises or other supporting frames, wrapping around supports with thin, spiraling tendrils. The plant may also root in a soilless medium and will sprawl along the ground if it does not have supports. The vine has large leaves that form a canopy over the fruits. The fruit of typical cultivars of cucumber is roughly cylindrical, but elongated with tapered ends, and may be as large as 60 centimeters long and 10 centimeters in diameter, according to certain sources.

It is originally from South Asia, most probably from India, where a great many varieties have been observed, from Cucumis hystrix. It has been cultivated for at least 3,000 years, and was probably introduced to other parts of Europe by the Greeks or Romans.

Cucumber is listed among the foods of ancient Ur, an important Sumerian city-state in ancient Mesopotamia, and the legend of Gilgamesh describes people eating cucumbers, too. They are mentioned in the Bible as one of the foods eaten by the Israelites in Egypt. The Emperor Tiberius is said to have cucumber on his table daily during summer and winter, and the Romans reportedly used artificial methods (similar to the greenhouse system) of growing to have it available for his table every day of the year.

The Romans are reported to have used cucumbers to treat scorpion bites, bad eyesight, and to scare away mice. Wives wishing for children wore them around their waists. They were also carried by midwives, and thrown away when the child was born.

Records of cucumber cultivation appear in France in the 9th century, England in the 14th century, and in North America by the mid-16th century.

In the later 17th century, a prejudice developed against uncooked vegetables and fruits. A number of articles in contemporary health publications stated that uncooked plants brought on summer diseases and should be forbidden to children. The cucumber kept this reputation for an inordinate period of time: “fit only for consumption by cows,” which some believe is why it gained the name, cowcumber…

Later on, cucumber gained back its reputation and has become one of the most popular vegetables, almost in the whole world.

Botanically speaking, the cucumber is classified as a pepo, a type of botanical berry with a hard outer rind and no internal divisions. Much like tomato and squash, it is often perceived, prepared and eaten as a vegetable. Cucumber fruits consist of 95% water, full of vitamins and have various positive medical effects which are all considered to be reasons of its outstanding charm and popularity.

This is a very easy receipe, though very tasty and spectacular. Perfect for extreme hot summer days, when you are not about to eat sweet fruits for some reason.

400 g natural yoghurt (not the greek one, because that is a bit sweeter and tougher)
2 small pieces of garlic, chopped or crumbled
250 g cucumber, peeled
a bit of salt
1 dl mineral water  (still)

Cut the cucumber into small pieces, put it into the food processor and process until gets smashed. Add the yoghurt, the garlic and the salt, and give them 20 seconds in the processor to get smooth. Add the water and stir it.

Cool down. Serve in glasses and offer as a shake.

… and how we cook rice