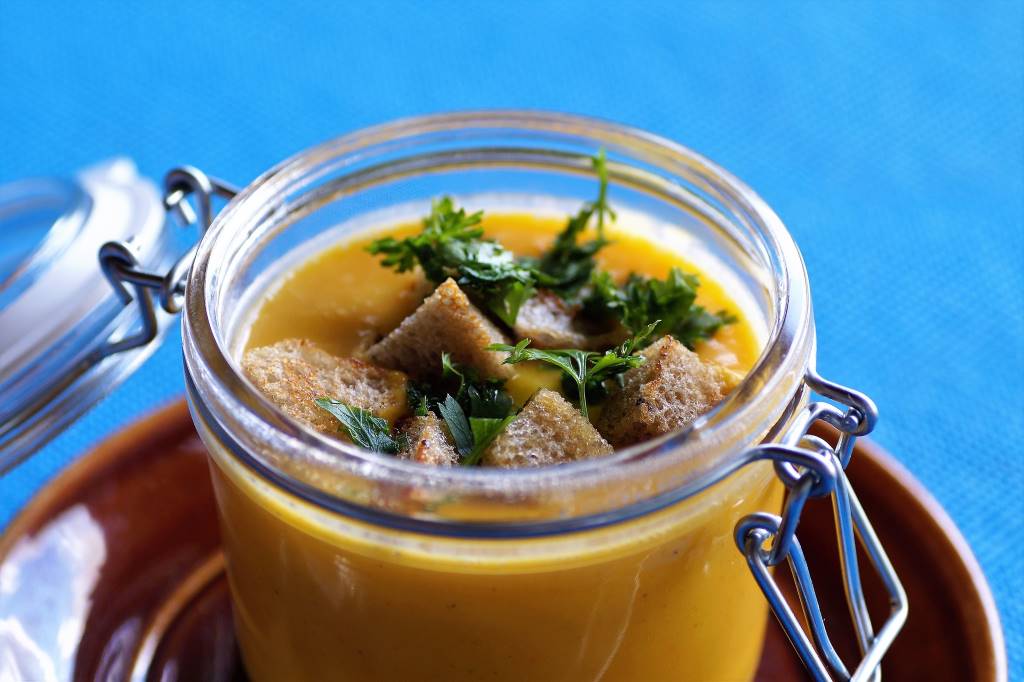 A pumpkin is a cultivar of a squash plant, most commonly of Cucurbita pepo, and in case of larger versions, of Cucurbita maxima. Specific cultivars of winter squash, derived from other species, including Cucurbita argyrosperma and Cucurbita moschata, are also sometimes called “pumpkin”.

It has a round shape with smooth, slightly ribbed skin, and most often deep yellow to orange in coloration. Its thick shell contains the seeds and pulp. Traditional Cucurbita pepo pumpkins generally weigh between 3 and 8 kilograms, though the largest cultivars (of the species Cucurbita maxima) regularly reach weights of over 34 kg.

The color of pumpkins derives from orange carotenoid pigments, including beta-cryptoxanthin, alpha and beta carotene, all of which are provitamin A compounds converted to vitamin A in the body.

Pumpkins are one of the oldest domesticated plants, having been used as early as 7,500 to 5,000 BC. Native to North America (northeastern Mexico and southern United States), pumpkins are widely grown for commercial use and are used both for food and recreation. Nonetheless, commercially canned pumpkin purée and pumpkin pie fillings are usually made from different kinds of winter squash (which would not necessarily be called pumpkin).

Pumpkin pie is a traditional part of the Thanksgiving menu in Canada and the United States, and pumpkins are frequently carved as jack-o’-lanterns for decoration around Halloween.

Pumpkin leaves, mostly of Cucurbita moschata varieties, are eaten as a vegetable in Korean cuisine, and – together with the flowers – are used for making saag and kachri/pakoda, in various parts of India.

Pumpkin seeds, also known as pepitas, are edible and rich in protein, magnesium, copper and zinc. They are a popular snack that can be found hulled or semi-hulled at most grocery stores. Pumpkin seed oil, a thick oil pressed from roasted pumpkin seeds, appears red or green in color. It is used for cooking or as a salad dressing, and contains fatty acids, such as oleic acid and alpha-linolenic acid.

The word pumpkin originates from the word pepon which means  “large melon” in Greek. The French adapted this word to pompon, which the British changed to pumpion and to the later American colonists became known as pumpkin.

The term pumpkin has no agreed botanical or scientific meaning, and is used as a synonym to “squash” and “winter squash”. In North America and the United Kingdom, pumpkin traditionally refers to only certain round shaped, orange color varieties of winter squash, predominantly derived from Cucurbita pepo, while in Australian English and in New Zealand, pumpkin can refer to winter squash of any appearance.

Pumpkins are grown all around the world for a variety of reasons ranging from agricultural purposes (such as animal feed) to commercial and decorative ones. Of the seven continents, only Antarctica is unable to produce them. The traditional American pumpkin used for jack-o’-lanterns is the Connecticut Field variety.

This is a very easy recipe, though very tasty and spectacular, besides being healthy. You find a vegan and dairy free version below, which can – of course – be amended.

tiny dash of cayenne pepper (optional, if you like it spicy)

some cream and parsley for additional decoration (optional)

Preheat the oven to 220 degree Celsius and line a baking sheet with parchment paper for easy cleanup. Halve the pumpkin and take out the seeds. Cut the halves again, to get 4 quarters.  Brush or rub 1 tablespoon olive oil over the flesh of the pumpkin and place each quarter, cut sides down, onto the baking sheet. Roast for 40 minutes, turn the quarters to their other cut sides after 20 minutes, until the orange flesh is easily pierced through with a fork. Set it aside to cool for a few minutes.

Heat the remaining 3 tablespoons olive oil in a pot over medium heat. Once the oil is shimmering, add onion, garlic and salt to the skillet. Stir it well. Cook, stirring occasionally, on low heat, until onion becomes translucent, which is about 8 to 10 minutes. In the meantime, peel off the pumpkin quarters.

Add the pumpkin flesh, cinnamon, nutmeg, cloves, cayenne pepper (if applicable), and a few twists of freshly ground black pepper. Mesh the pumpkin a bit, just with the spoon you are working with. Pour in the broth. Boil the mixture, then reduce heat and boil further for another 15 minutes for the best flavor.

While the pumpkin mixture is cooking, toast the green seeds in a medium skillet over medium heat, stirring frequently, until you can smell it, becomes golden and makes popping noise. Once ready, put them aside in a small bowl.

Put the brown bread slice into the toaster and toast it until it gets golden brown. Once done, cut it into 1 cubic cm pieces and put them aside to cool in a small bowl.

Once the pumpkin mixture is done cooking, stir in the coconut milk and honey. Remove the soup from heat and let it cool slightly. Use an immersion blender to blend this soup in the pot. Taste and adjust with the spices, if necessary.

Serve the soup in small bowls, and sprinkle seeds over the top, add some toasted brown bread cubes and decorate with cream and/or parsley, if you would like it to be more spectacular.

… and how we cook rice