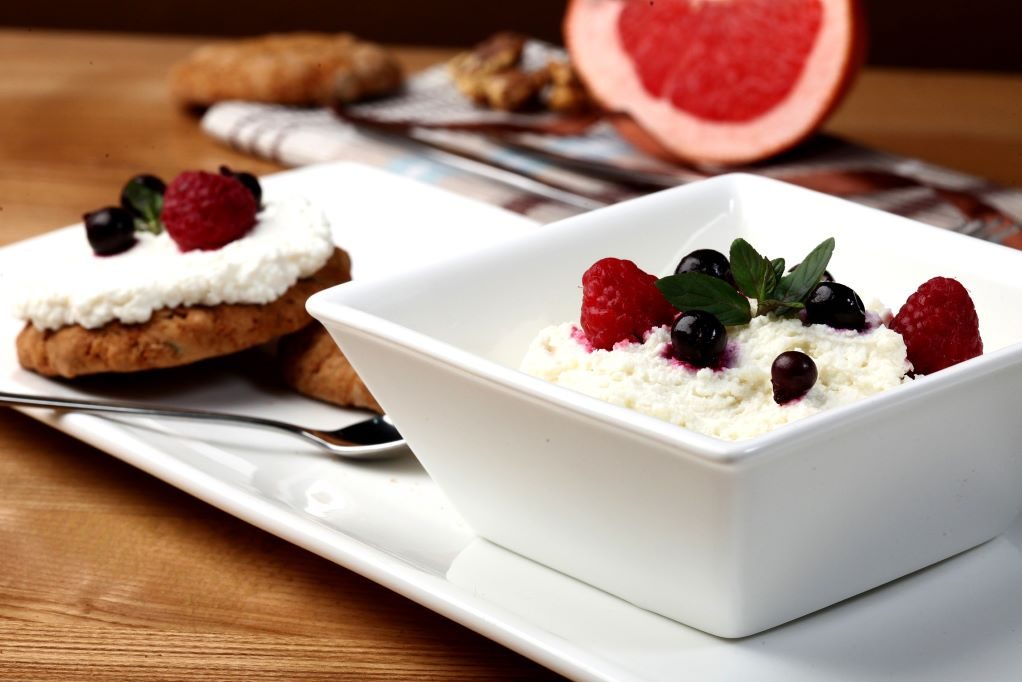 Yogurt is unquestionably one of those products that we use in a huge variety of forms, as a dish, itself, ingredient of sauces, dressings, appetizers, starters and main dishes, desserts and also drinks. It is present in the whole world from Indonesia to North-America,.

We also referred to it in one of our posts, and provided you with a cool recipe. Now, it is time to give you some insight to yogurt’s history and origin, and some interesting information about its uses. Of course, we also provide you with an additional recipe.

The word yogurt is derived from the Turkish: yoğurt, and is usually related to the verb yoğurmak, “to knead”, or “to be curdled or coagulated; to thicken”. It may be related to yoğun, meaning thick or dense. It also spelled yoghurt, rarely yogourt or yoghourt, in English.

Yogurt is produced by bacterial fermentation of milk. Fermentation is the process of converting carbohydrates to alcohol or organic acids using microorganisms – yeasts or bacteria – under anaerobic conditions. Fermentation usually implies that the action of microorganisms is desired. The term itself sometimes refers specifically to the chemical conversion of sugars into ethanol, producing alcoholic drinks such as wine or beer. However, similar processes take place in the leavening of bread  and in the preservation of sour foods with the production of lactic acid, such as in sauerkraut.

The bacteria used to make yogurt are known as yogurt cultures. The fermentation of lactose by these bacteria produces lactic acid, which acts on milk protein to give yogurt its texture and characteristic tart flavor.

Yogurt is produced using a culture of Lactobacillus delbrueckii subsp. bulgaricus and Streptococcus thermophilus bacteria. In addition, other lactobacilli and bifidobacteria are sometimes added during or after culturing yogurt.

To produce yogurt, milk is first heated, usually to about 85 degree Celsius, to denature the milk proteins so that they do not form curds. After heating, the milk is allowed to cool to about 45°degree Celsius. The bacterial culture is mixed in, and that temperature is maintained for 4 to 12 hours to allow fermentation to occur. The milk used may be homogenized or not, even pasteurized or raw. Each type of milk produces substantially different results.

Cow’s milk is commonly available worldwide and, as such, is the milk mostly used to make yogurt. Nevertheless, milk from water buffalo, goats, ewes, mares, camels, and yaks is also used, where available locally. For vegans and those people with intolerance to dairy milk, a variety of plant milk yogurts are available, since the 2000s, using soy milk, rice milk, and nut milks such as almond milk and coconut milk.

The origins of yogurt are unknown, but it is thought to have been invented in Mesopotamia around 5000 BC. In ancient Indian records, the combination of yogurt and honey is called “the food of the gods”. Persian traditions hold that “Abraham owed his fecundity and longevity to the regular ingestion of yogurt”.

The cuisine of ancient Greece included a dairy product known as oxygala, which is believed to have been a form of yogurt. Oxygala was most probably consumed with honey, similar to the way thickened Greek yogurt is eaten today. The oldest writings mentioning yogurt are attributed to Pliny the Elder, who remarked that certain “barbarous nations” knew how “to thicken the milk into a substance with an agreeable acidity”.

The use of yogurt by medieval Turks is recorded in the 11th century. The earliest yogurts were probably spontaneously fermented by wild bacteria in goat skin bags.

Some accounts suggest that Mughal Indian emperor Akbar’s cooks would flavor yogurt with mustard seeds and cinnamon. Another early account of a European encounter with yogurt occurs in French clinical history: Francis I suffered from a severe diarrhea which no French doctor could cure. His ally, Suleiman the Magnificent, sent a doctor, who allegedly cured the patient with yogurt. Being grateful, the French king spread around the information about the food that had cured him.

Until the 1900s, yogurt was a staple in diets of people in the Russian Empire (and especially Central Asia and the Caucasus), Western Asia, South Eastern Europe/Balkans, Central Europe, and the Indian subcontinent.

Stamen Grigorov, a Bulgarian student of medicine in Geneva, first examined the microflora of the Bulgarian yogurt. In 1905, he described it as consisting of a spherical and a rod-like lactic acid-producing bacteria. In 1907, the rod-like bacterium was called Bacillus bulgaricus (now Lactobacillus delbrueckii subsp. bulgaricus).

The Russian Nobel laureate and biologist Ilya Mechnikov, from the Institut Pasteur in Paris, was influenced by Grigorov’s work and hypothesized that regular consumption of yogurt was responsible for the unusually long lifespans of Bulgarian peasants. Believing Lactobacillus to be essential for good health, Mechnikov worked to popularize yogurt as a foodstuff throughout Europe.

Isaac Carasso industrialized the production of yogurt. In 1919, Carasso, who was from Ottoman Salonika, started a small yogurt business in Barcelona, Spain, and named the business Danone (“little Daniel”) after his son. The brand later expanded to the United States under an Americanized version of the name: Dannon. Yogurt with added fruit jam was patented in 1933 by the Radlická Mlékárna dairy in Prague.

Yogurt was introduced to the United States in the first decade of the 20th century. It was available in tablet form for those with digestive intolerance and for home culturing. It was popularized by John Harvey Kellogg at the Battle Creek Sanitarium, where it was used both orally and in enemas, and later by Armenian immigrants Sarkis and Rose Colombosian, who started ‘Colombo and Sons Creamery’ in Andover, Massachusetts in 1929.

Colombo Yogurt was originally delivered around New England in a horse-drawn wagon inscribed with the Armenian word “madzoon” which was later changed to “yogurt“, the Turkish language name of the product, as Turkish was the lingua franca between immigrants of the various Near Eastern ethnicities, who were the main consumers at that time. Yogurt’s popularity in the United States was enhanced in the 1950s and 1960s, when it was presented as a health food by scientists like Hungarian-born bacteriologist Stephen A. Gaymont. Plain yogurt still proved too sour for the American palate and in 1966 Colombo Yogurt sweetened the yogurt and added fruit preserves, creating “fruit on the bottom” style yogurt, the production of which was discontinued.

Dahi is a yogurt from the Indian subcontinent. The word seems to be derived from the Sanskrit word dadhi (“sour milk”), one of the five elixirs, or panchamrita, often used in Hindu ritual. It is mostly made of goat and buffalo milk.

Dadiah or dadih is a traditional West Sumatran yogurt made from water buffalo milk, fermented in bamboo tubes. Yogurt is common in Nepal, where it is served as both an appetizer and dessert. In Tibet, yak milk is made into yogurt (and butter and cheese) and consumed.

In Northern Iran, Mâst Chekide is a variety of kefir yogurt with a distinct sour taste. It is usually mixed with a pesto-like water and fresh herb purée called delal. It appears in a variety of appetizers, cold and hot soups. Even the leftover water extracted when straining yogurt is cooked to make a sour cream sauce called kashk, which is usually used as a topping on soups and stews.

Matsoni is a Georgian yogurt in the Caucasus and Russia. Tarator and Cacık are cold soups made from yogurt during summertime in eastern Europe. They are made with ayran, cucumbers, dill, salt, olive oil, and optionally garlic and ground walnuts. Tzatziki in Greece and milk salad in Bulgaria are thick yogurt-based salads similar to tarator.

A wide variety of local Lebanese. Jordan and Syrian dishes are cooked with yogurt. They are prepared either with cucumber and herbs or with rice, both in cold and hot versions.

Did you become interested? Please see some links below.

As you may have recognized, we are about to provide you with easy, daily recipes, which are not only tasty and spectacular, but also healthy. This time, the only thing you need for measurement is a tablespoon, and your calculator (or mind?) to multiply in case you need more portions.

You can, as usually, create a vegan and dairy free version, changing the respective ingredients. In this case, switch to plant-based yogurt products. If you are also avoiding honey due to the fact that it is produced by bees, you can try to replace with maple syrup, altough you lose the positive health effects and should mind the additional carbo-hydrate intake.

1 ts honey (we use acacia, but you can use any other quality product you like)

Put the yogurt into a bowl and add the lemon juice, linseed oil and honey one by one, stirring properly between each. This is the way to ensure a smooth and gentle outcome, otherwise the ingredients may react with each-other.

Once smooth, add the oat-flakes and the ground walnut. Stir again. Put aside for  5 minutes (until making the breakfast table). Put the fruits on the top before serving.

You can store in the fridge until the next morning, but the texture will degrade due to the reaction between the acids and the oat-flakes. Anyway, t is better to make it fresh every morning.

Give them a pumpkin to talk about