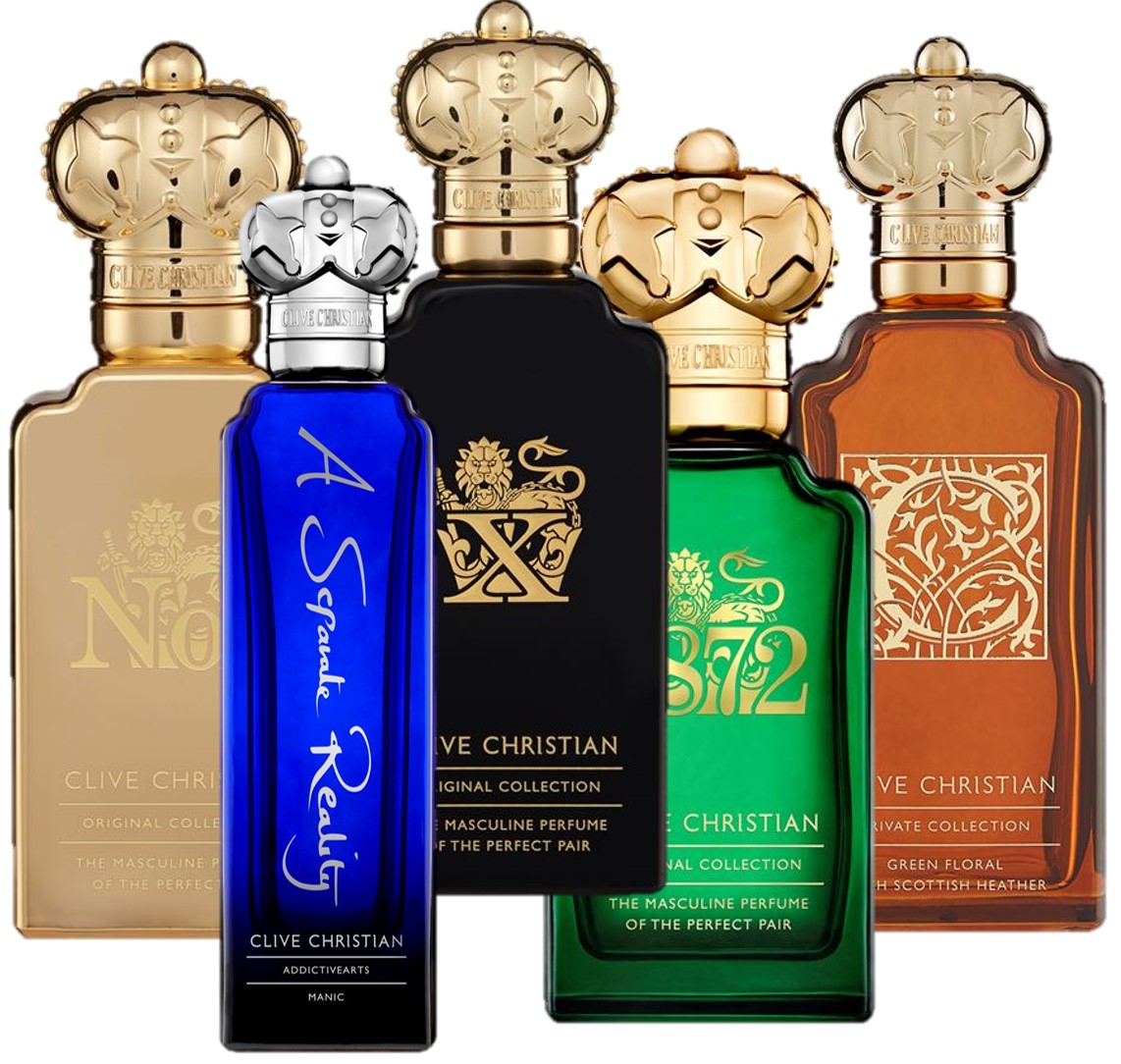 Clive Christian perfumes are the result of talent, expertise, passion and the belief that perfumery is an art. This perfume house was reborn from the once lost Crown Perfumery, a Victorian perfume house that was a favorite of the royal family. Created in the tradition of British perfumery, the Clive Christian fragrances bear the image of Queen Victoria’s crown, upon her permission granted in 1872.

Who is Clive Christian?

Clive Christian was born on 12 July 1951, in Dundee, Scotland, as the eldest of four children to a biochemist father and an artist mother. He was raised and educated in Cheshire, England. Upon leaving college, he embarked on a career as a freelance interior designer. He is a British designer best known for his designer kitchens and his creation of Clive Christian ‘No. 1′, used to be the world’s most expensive perfume in 2006.

Clive Christian Furniture was founded in 1978 when Christian bought a manor house in Cheshire built in the late 19th century and began to renovate it with bespoke furniture. The first design released was his Victorian Kitchen. When demand for his designs increased he bought a factory and started to create personal designs for his customers. The range has since been enlarged to cater to every room in the house, from the bedroom to the media/games room.

In 1999 he purchased the Crown Perfumery Company and established Clive Christian Perfume. It now employs several hundreds of people and as of 2018 features 6 collections of different perfumes on its site.

Christian was appointed Officer of the Order of the British Empire (OBE) in the 2012 New Year Honours for services to the luxury goods industry.

The history of The Crown Perfumery begins in New York where William Sparks Thomson manufactured perfume and soap. The same Mr. Thomson opened a corset business in London in 1840. Sometimes Thomson’s female clients would faint due to the tightness of the high busted corsets. It was Thomson’s son William, a chemist, who came up with the idea of producing lavender based smelling-salt to revive the fainting ladies. The production of smelling salts was soon followed by the creation of the first extra concentrated perfume called ‘Crab Apple Blossom” in 1865 – the first ever perfume from the fragrant blossoms of the crab apple tree. The fine perfumes created by Thomson were highly sought after by the elite of the day.

The Crown Perfumery was established in London in 1872, as a subsidiary of Thomson and it was also the year in which Queen Victoria gave the perfumery permission to use the crown on its bottles, a signature ever since. It was Queen Victoria’s way of letting the world know that these were complex perfumes made from precious ingredients; those that she thought were amongst the most beautiful in the world. She herself loved ‘Crown Essence’, made especially for her, while her daughter-in-law, the Princess of Wales, liked to wear ‘Crown Rose’.

The Crown Perfumery had the high society of London and Europe among its clients and became present in the boudoirs of palaces and mansions with its high-quality products. Owning a Crown Perfumery product has become a kind of a status symbol.

By 1879 it was exporting half a million bottles of 49 different scents to 47 different countries around the world. It became the most fashionable perfumery amongst the worldly elite so it was no surprise that in 1912, the products are noted in the ships log of the First Class cabins of The Titanic.

By the 1920s, The Crown Perfumery had won over twenty medals indicating the quality of its products.

On 30 June 1921 William Gossage & Sons Ltd, (a subsidiary of The Lever Brothers Soap manufacturers), purchased the Crown Perfumery Company. In 1930, The Lever Brother’s merged with a Dutch company forming Unilever.

The invigorating qualities of the Crown Perfumery Lavender Salts were chosen by Amelia Earhart, the first female pilot to fly solo across the Atlantic, to accompany her on her voyage to aid her focus concentration and to avoid fatigue. The Amelia Earhart Collection at Purdue University features the bottle used by Amelia during her 1932 solo flight.

On 31 December 1937 the Crown Perfumery Company ceased the manufacturing and supply of its products and on 20 June 1989 was sold by Unilever.

In 1993 Crown Perfumery’s best-selling perfumes were revived and a boutique in London was opened. Legend has it that ‘Alpine Lily’, a perfume from the 1890s, was a favourite of Princess Diana.

Whilst waking down the Burlington Arcade, Clive Christian OBE discovered the Crown Perfumery and realised the opportunity to breathe new life into a perfume house with such an exciting and unrivalled heritage. It was resurrected as Clive Christian Perfume, and the inaugural ‘Original Collection’ of perfumes were launched in 1999. In doing so, he restored the craft and tradition of haute perfumery, bringing back to life perfumes that are fit to wear a crown. The iconic ‘1872′ perfume, which is part of the ‘Original’ Collection is Clive Christian’s ode to this rich history.

In 1999, when Clive Christian OBE acquired The Crown Perfumery Company, it seemed only right that he should delve into the archives, seek out what was finest and best, and then tweak and update it for modern tastes. So it was that ‘1872′ came about. Both a masculine and a female version came out. The former as a fresh, spicy, citrusy chypre. The latter is a floral fruity citrus and smells like the most heavenly fresh flower bouquet.

Just like 150 years ago, Clive Christian Perfume produces the highest possible quality perfumes featuring the rarest, most precious ingredients and is pioneering new ways of perfume creation. And just like in 1872, the modern elite of today is proudly wearing Clive Christian perfumes, from inspiring entrepreneurs and Hollywood royalty to music superstars.

Clive Christian Perfume sells its products – besides its online store – at Harrods, Selfridges and Fortnum & Mason in the UK as well as globally throughout America, Europe, Russia and the Middle East. You can find the available pieces of the collections here (CH), here (AT), here (DE) or here (HU).

Niche perfumes II. – B, for Byredo

Niche perfumes – A, for Amouage