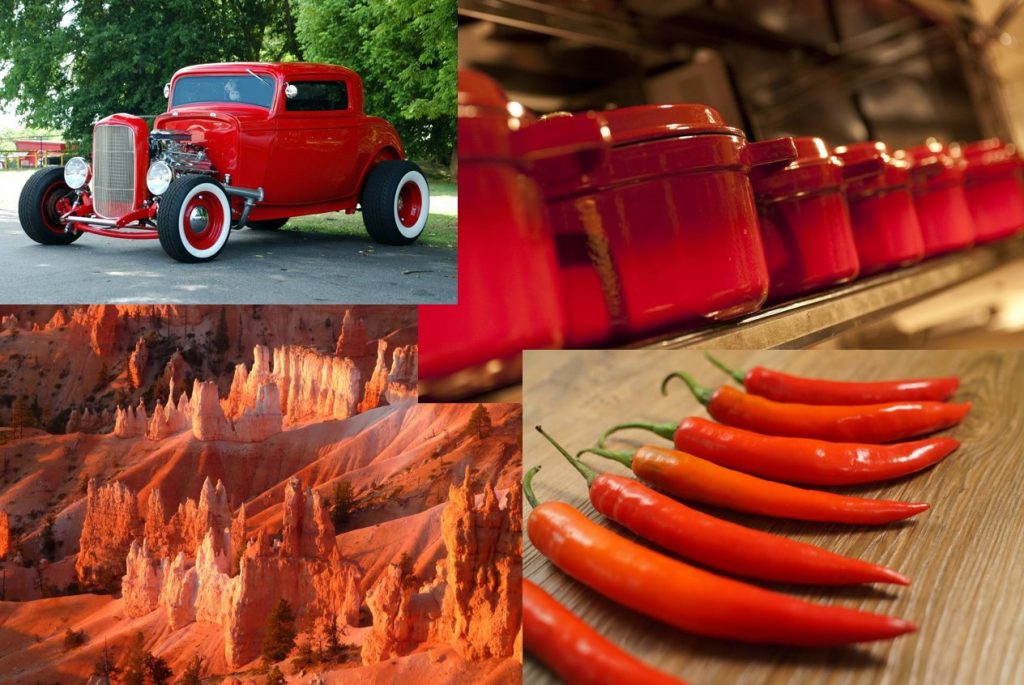 China: colors correspond with the five primary elements, the directions and the four seasons. Red is associated with fire, south, and summer. Besides these, red is associated with good luck an fortune. Chinese New Year is celebrated by wearing red clothing and decorating the house with red. Red envelopes with “luck money” are given to unmarried children to bring good fortune to them for the rest of the year.

India: as a sign of marriage, women put red powder on the hair parting. They also wear a red sari during marriage. On the death of a woman, her body is wrapped in a red cloth for the cremation.

Japan: the color red is associated closely with a few deities in Shinto and Buddhist traditions, so statues of these deities are often decked in red clothing or painted red.

Sweden: the Falun red (red based on the pigment from the Falun mine) is reserved for the privileged class.

Greece: the Easter eggs are dyed red and the Greek expression “piase kokkino” (“touch red”) is said when two people say the same thing at the same time. It is believed that such an occurrence is an omen that the two will have an argument in the future, which can only be broken when the two touch the closest thing that is red.

Buddhism: paintings known as red thangkas require high technical virtuosity. All elements making up these painting are subsumed in the overall red field characteristic of this special genre of thangka. Red is the color of powerful rituals and deeds, passion, transmuted to discriminating wisdom.

Hinduism: Red indicates both sensuality and purity. In Hindu religion, red is of utmost significance and the color most frequently used for auspicious occasions like marriages, birth of a child, festivals, etc. A red mark is put on the forehead during ceremonies and important occasions. Red powder is usually thrown on statues of deities and phallic symbols during prayers. It is also the color of Shakti (prowess). A red colored dress is put on deities who are charitable, brave, protective, and who have the capacity to destroy evil.

Islam: Although red is often also associated with Islam, it does not have any particular religious significance. Red was featured on Muslim battle standards, which may be why it appears on some national flags today. The color red may also have come to be associated with Islam because in Muslim countries the International Red Cross has used the red crescent symbol on its flags since 1876.

Color of the month: green – meaning and symbolism